One can never underestimate the determination of a mother of a hungry family. Believing that every mother needs spiritual, emotional, physical and mental strength, Selvi has come a long way from where she started. 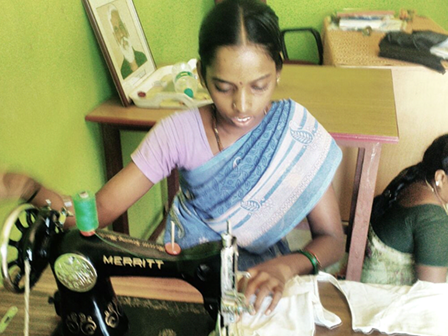 Selvi’s father died when she was eight years old and had no father figure to look up to. Her mother was not able to recover from the shock of her husband’s early death. She sunk into despair and did not take care of her children. She had to feed three of her children, Selvi being one of them. Selvi, being the second child, grew up being cared for by her older sibling and taking care of her younger sibling. She hardly had time to embrace life.

She got married and became a mother in her teens, but had no idea about raising both her girl babies. Unsupported and without education, she lost all hope in the future.

One of her neighbors took pity on her plight and helped Selvi build a simple way to earn a living. Being a very old woman with no proper training, she taught Selvi how to sew. Selvi learned very little from the neighbor but started stitching at home using materials she could afford. She earned a pitiable amount from stitching for her villagers, which was hardly enough to feed her children. Due to her poor stitching skills, people soon realized that Selvi was not trained and stopped giving her work.

She was clearly desperate to feed her children when she heard of Tripura Foundation and joined the tailoring center for a proper way to learn. She started here and been learning with determination to finish where she started. Now, with professional help, she is excelling in her work. She continues her work at home and been earning enough to feed her hungry family.

She has transformed from being a terrified, young girl into a confident mother. She continues to learn in the tailoring center and is very grateful to be able to build a secure future for her children. She says that even though she will not be able to afford to open her own shop she will be able to continue to stitch from her home and earn a living.