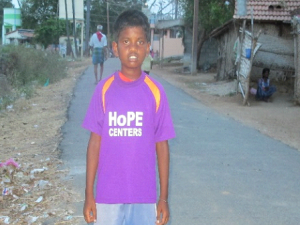 Manikandan is a 7th grader. He lives with his father in a rented house. His mother committed suicide a couple of years ago. Since then, Manikandan had been in a state of misery. He did not eat food properly and stopped speaking with others. He was completely in his own world. His father and family tried making daily conversations to get him to speak at least a few words, but they soon gave up. His father tried everything within his power to make his son feel better but nothing seemed to work until he found out about our HoPE Learning Center and enrolled Manikandan. At first, Manikandan showed no signs of improvement, but, gradually, as he started practicing PI and yoga, he recovered from depression. Finally, he is playing games, participating in activities and studying his subjects. His father is beyond words in expressing his happiness and gratitude to Tripura Foundation for bringing HoPE to his child.